The other day, I read an essay by someone who used the word "tabby" in a negative sense; that is, when a person is acting like a "tabby", it is not a good thing to be. I can't find the original statement, but when I read it, I was outraged. Or, at least, I tried to be outraged, but I was mostly just feeling very tired, but relaxed, and peaceful, and... tabbyish. 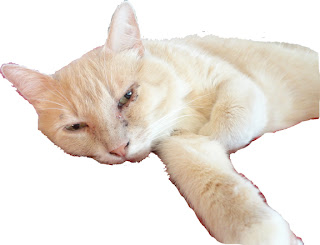 There are far worse things than being a tabby, particularly at the end of a term.

You might not want to be a tabby (in the correct sense of the word) while giving a talk at a conference, interviewing for a job, or writing a grant proposal (except while doing the budget).

But you might want to be a tabby while attending a faculty meeting, meeting with prospective graduate students, or grading. Actually, I am not sure about the grading.

Tabbyism definitely has its place in academic life, especially on this December Friday.

Posted by Female Science Professor at 12:16 AM

Email ThisBlogThis!Share to TwitterShare to FacebookShare to Pinterest
Labels: cats

This manuscript is too tabby! Please indent with care.

But that picture is not of a tabby:
"A cat whose fur is mottled or streaked with dark stripes."

He is a tabby in all ways that count, and from other views, he can be seen to have a mixture of dark orange and light orange stripes. We strongly suspect tabby elements are in his ancestry.

He looks just like one of my cats! Mine also has the light/dark orange stripes, primarily on the legs and tail. I also notice that yours, like mine, has the distinctive tabby "M" on his forehead. I believe this kind, with fewer stripes (such as only on the legs and tail like mine) are called "ticked tabbies," and have the agouti hairs (alternating light and dark on the individual hairs).

Do tabbies ask for and get raises?