As I have done once in the past, I rummaged through the FSP archives to see how often I discuss particular general topics. The last time I did this, more than a year ago, I determined that about 20% of my posts could be classified as focused on the F (female) aspect of being an FSP and the rest were either SP (on being a Science Professor), P (on being any kind of professor), or Other (cats, the rest of life etc.). In my previous classification, I used 3 categories, combining the Science Professor and general academic-themed posts.

I was curious: Am I consistent over time, erratic, increasingly dominated by a particular topic?

So I looked through the 2009 archives, and I decided that the categories I used last time were still good ones to use. Assigning posts to categories is in some cases obvious; in others, not so obvious. For example, my very first post of 2009 related to an incident in which a strange man repeatedly hurled himself at the back door of my house late at night when my daughter and I were alone in the house. The police came and took him away before he could get in. I used this post to ask how we, as parents, can teach our daughters to be safe but not terrified as they go through life. Is that a "feminist" topic or a life/misc topic? Well, of course it is both. When you are a woman writing about your life, it is difficult (and pointless) to separate the two.

Another example of what I consider an ambiguous post (in terms of topic classification): a discussion last February of the so-called "two body problem" as applied to grad students. I don't see that as a feminist issue, but I am sure that some readers would disagree.

And what about this one: feminist post or not? And discussion of things like family leave policies for graduate students and postdocs? Whether someone has a "Baby Gap" in publication owing to having a child? Whether it's OK to bring your kids to work with you?

In the end, it didn't really matter. The ambiguous ones, by my count, were only ~2% of the total so I decided to classify them all as "feminist".

Here are the data:

% about issues related to being an FSP + other "female' themed posts: 19%

That's about the same as last time. The most shocking result, for me, was the distressing dearth of cat photos in 2009. 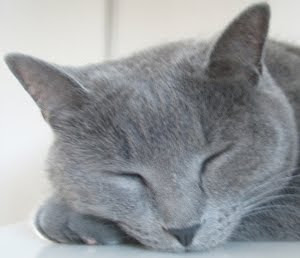 Posted by Female Science Professor at 12:01 AM

I agree that cat photos are a welcome addition. Perhaps they should get their own category, so they can be properly statistically measured... :)

I find it fascinating that you get a lot of complaints/comments about this being a blog about feminism, when only about 20% of your posts have "female" themes (and not even necessarily feminist themes).

I like all of your post topics, but yes you need to incorporate more cat photos in 2010. That is my only critique.

Gorgeous cat! The quantity of cat pix may be low, but quality is high.

So, we need to bring in the meta-meta: how would this post be categorized!?

As a former cat owner and lover and now married to someone who has tremendous allergies to cats- I say more cat pictures. Your cat is very cute and I am jealous. Oh, and more feminism posts too - why not? Feminists can like cats too...

I am amazed at your blog production, admired the consistency, and enjoyed the quality.