Well this is a bit depressing

From an interview of Rita Colwell (former NSF Director) by National Geographic:


Are you still treated differently as a woman?

Certainly. I still have to tolerate it. It doesn't stop; it never stops. It's just that now it's more covert and not overt.

Can you give an example?

There are too many examples to even begin to enumerate.

I was somewhat surprised by this. Why was I surprised? I don't know.. I can't say I know anything about Rita Colwell's work as a molecular biologist, but it seems to me that she is a rather excellent example of a successful female science professor; that is, successful at a level that most of us will not achieve. It would have been nice if she could have reported to the rest of us that she had to put up with a lot of stupid stuff early in her career but that had faded away as her career progressed.

I suppose I am interpreting the mild question about being "treated differently" to refer to negative experiences. That is how Rita Colwell seems to interpret the question as well.

And I do wish she had given some examples, particularly of the covert situations she still experiences. I believe her 100% that she does experience these things and that it is not pleasant, and I would be interested to know what kinds of things she has to deal with even now, as a senior and very distinguished professor.

Not long ago, a correspondent wrote to me that a female grad student had said to her that "it's even worse to have role models who are treated horribly than to not have role models".

We could argue about what it means to be treated "horribly", but I think it is too bad to discard some potential role models (whatever that term really means) because they had to struggle -- perhaps quite a lot -- in their careers. Would this grad student not consider Rita Colwell as a good role model because Colwell feels she has had (and continues to have) some (presumably negative) experiences she has to "tolerate" because she is female? Perhaps -- everyone has their own definition of what is a good role model for them) -- but I think that restriction would substantially thin the ranks of potential role models, and that's probably not a good thing.

Posted by Female Science Professor at 12:03 AM 28 comments:

Email ThisBlogThis!Share to TwitterShare to FacebookShare to Pinterest
Labels: women in science

Question from a reader:

In your experience in faculty search committees, with respect to hiring an assistant professor, are postdoc positions at national laboratories (e.g. Sandia) viewed with higher regard, equal regard, or lower regard when compared with a postdoc at Prestigious University?

In my experience, all other things being equal (even though they never are), these postdocs would be held in equal regard. I say that mostly because national lab postdocs are certainly not held in lower regard, and I can't think of why they would be held in higher regard.
Posted by Female Science Professor at 12:03 AM 6 comments:

Email ThisBlogThis!Share to TwitterShare to FacebookShare to Pinterest
Labels: applying for a faculty position, postdocs

Yes, I know that Acceptance is Stage 5 in the evolution of grief, but in the academic context of graduate admissions, it is Stage 2(ish), in the sense of Stage 1 = Application; Stage 2 = Acceptance (or not).

At this time of year in the US academic calendar at many institutions, students have been accepted, rejected, or put on hold by the graduate programs to which they applied. Some departments or programs bring in prospective students for an interview or recruiting visit; in the first case to make final decisions about admissions, and in the other case to try to convince students to accept their offers of admission.

Some departments bring in some of each, and some bring them all in at the same time. That is, a group of prospective grad students are brought to visit as a group: some have been offered admission, some have not (yet). The idea for this post is based on a conversation I had with an undergrad who recently participated in one of these 'hybrid' events.

According to this student, the not-yet-accepted students worked very hard to impress their potential advisors and other faculty and researchers. In the opinion of this student, those who had been accepted did not work so hard (or, at least, some didn't. I have no direct knowledge of the situation, but it was the opinion of this student that those accepted were significantly less concerned with making a good impression than those who had not yet been accepted.)

I suppose if I think back over my years of encounters with prospective students at conferences (before admissions decisions are made) and my subsequent meetings with them after they receive an offer of admission but before they make a decision, I could come up with some examples of students who were energetic pre-admission and lethargic post-admission. Without being any more specific than that, I can say that my experiences seem to back up this undergrad's impressions.

I asked this student: But don't those who have been accepted know that they still need to impress their potential advisors? If they accept the offer at that place, why would they want to start off working with someone who may now have a somewhat negative impression of them? Or perhaps they behaved that way during the visit because they are not serious about accepting the offer from that place, and they are just wasting everyone's time and money? Either way, this does not speak highly of the maturity of those students.

Yes, I know that someone can have an off day, be recovering from the flu, experiencing stress, be exhausted from midterms and travel etc. etc. etc., but exceptions aside, I hope that it is not the case that, once accepted, many students think that it is only their opinion that matters now. It is a two-way street: the students need to check out the departments and potential advisors to make good decisions about what is best for them, and the departments and potential advisors are still checking out the students, even those admitted.

Questions for those who advise grad students and for whom this mode of grad recruiting is relevant:

Question for current and former graduate students who have been on recruiting visits to programs to which they had been accepted:

Posted by Female Science Professor at 12:03 AM 25 comments:

It was not inevitable, but once it happened, no one was surprised. This is particularly strange because even just a few years ago it would have been considered bizarre -- if it had even been considered, which it wouldn't -- to think that Kitten X would ever become an administrator. And now look where we are.

For those who have not been closely following Kitten X's academic career: he was first hired in 2007, following a rigorous search. Remarkably, he received tenure in 2008. Now, in 2013, he has taken on some administrative responsibilities.

It would be incorrect to infer from this that his career has stalled. In fact, he is as energetic as ever. This is why we still call him "kitten", although he is an extraordinarily large cat.

Some have wondered whether it was wise for him to take on administrative responsibilities now, at a time when his days were already happily and productively filled with a wide array of feline activities. Kitten X has no good explanation for why he is doing this.

Does he have the interpersonal skills to be effective as a cat administrator? Kitten X does have some skills, and even some charms, although these charms have an edge to them (at times) and he can be impatient, hyper, and sarcastic. Some of the older cats sigh when they see him coming. 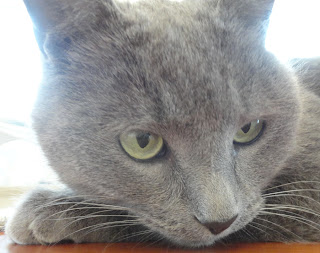 But he means well, mostly.
Posted by Female Science Professor at 12:05 AM 12 comments: