Last week, in a post that touched on the topic of post-tenure emotions (empowered vs. entrapped), I wrote this:


.. I have done my best work after getting tenure. I am not one of those genius-people who did her best work by age 30 (or 35). Some of us get tenure based in part on our accomplishments, such as they are at the time of the tenure evaluation, but also largely on a gamble about our potential. (I am going to explore an aspect of this more in a near-future post.)

The kernel of the idea I want to explore relates to what we do after tenure, no matter what we did before tenure. In this case, the "what" mostly refers to research because I am basing this discussion on my MRU*-centric point of view, but, with some modifications, this classification scheme could perhaps be exported to other situations. I think that probably most of us in academia can easily think of examples of each of these Types listed below, although some are more common than others. [* Major Research University]

Type F: flat trajectory before and after tenure, but at a high enough level to get tenure (maybe just skimming over and along the tenure bar) and high enough to escape the label of "deadwood" after tenure; not awesome, but steady and better than Type L..;

Type L: steep (L1) or moderate (L2) trajectory pre-tenure; other trajectories possible, e.g., intercept with vertical tenure-line may be just about anywhere, but the key to the L path is that it involves the total transformation to deadwood not long after tenure (that is, not decades after tenure, but instead it happens while still at the early/mid-career stage).

OMG I think I am going to have to graph this. 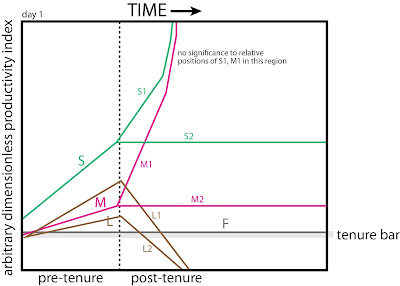 Note that there is no significance to the y-intercept. The Type S line could start above or below some of the other lines, for example, but I am imagining this type of person as making a strong start.

I think it is also important to note that I don't just mean 'number of publications' (or grants) in my definition of productivity. I mentioned creativity in my definition of Type S, and this is an important element of 'blooming' in my classification scheme. The post-tenure 'bloom' in this case is not just a churning out of a stupendous number of publications, but involves making new and interesting discoveries or advances, having new and creative ideas, and all that kind of good thing.

Also, there is no criticism attached to (some) of this. Some faculty who flatline at a moderate to low level, for example, have taken a different career path, such as one involving more teaching and/or service. That may or may not be fine, depending on circumstances and expectations.

Do you see yourself here, or did I leave out some important trajectories? Feel free to suggest significantly different trajectories (yours or your favorite/hated colleague's) and I may modify the graph later.


Posted by Female Science Professor at 12:04 AM

I think some form of path M is very common, although maybe something in between the very steep and the flat paths.

I kept my trajectory going up, and depending on what we are measuring it went up at the same or a higher level post tenure. I am at a liberal arts college and spent a significant time post tenure working on educational project, though not educational research... it did result in a lot of press and pubs, however.
However, since I was promoted to full, I think I have become deadwood. As soon as I finish getting all this old writing out the door, so no obvious impact on my trend line yet. But I feel like my productivity is going to take a big hit soon.

I'm around tenure time, and feel like I've got lots of ideas and the best is still to come. So I guess a good position to be in.
I have a colleague who shortly after tenure said "I've got no research ideas right now" and so I ended up taking on her grad student. But I can't imagine running out of ideas. Hope it doesn't happen.

My mom-- went into admin at some point after tenure, productivity flatlined. Got out of that and now people are all wondering who the new scholar is and are surprised to see her white hair at conferences.

I think the problem is, is that for overachiever self-defeatists, we will always think we're L when in fact we're something better. It's hard to tell. How do you know when you're deadwood?

Ok -- I'm pre-tenure so I'm definitely not deadwood yet.. but I haven't submitted a proposal as PI for 6 months now!!! I must be going on the L path already!! (Even though my 3 currently funded projects are eating all my time...) You see where I'm going here... *self-defeatist overachiever*

Woah! Are S1 and M1 individuals so productive they actually manage to cease moving forward in time?!? Because I think I could get a lot done if I stopped time, too!

I think I am the M1 type; it took me a while to get the confidence to really take off.

I know several S1's and they are all uberconfident and with excellent pedigrees; there is something about being groomed in several top-notch programs to make you feel entitled to high-profile publications and success, which is key in going after these things...

I have had to work on proving to myself that I can indeed play in the big leagues; coming straight out of the PhD and starting a faculty position without a postoc, I definitely did not have the confidence that is needed for a high-slope take off.

But near the end of my TT my slope started rising considerably and I think I am doing quite well now (a couple of years post tenure).

I see myself as a slightly decaying S2. After a few years at an MRU I realized that I can make the best contribution focussing on curriculum and administrative changes in my department and at the faculty level. Per-tenure I was afraid that doing too much of that would harm my chances of getting tenure.

Ironically, several people have commented "this should have been done years ago" ... to a recent effort.

This is interesting, and I wonder if there's any dependence on age at tenure or anticipated tenure. I'd put myself as an S2. I was doing really well early on, but then I got stuck at an institution that was a bit of a dead-end. I moved to a much more prominent institution, but due to very naive negotiating, I ended up falling backward in the career scale instead of moving forward -- i.e., my tenure clock got started from scratch. I've always felt that this was a psychological burden, leaving me to move forward on my existing science program. It was a great program, but if I'd been more appropriately positioned, career-wise, I think I would have set out to do something exceptional and higher risk. Instead, I just plodded along. Now I feel old and a bit too burnt out to do all the leg work on the exceptional and higher risk -- I'm just more in a rut, doing great, but not exceptional science.

My path is M1. It took me a while to learn how to balance the workload, get things done, write good papers and proposals, and recruit productive group members.

For some weird reason most of those who stood out in my generation turned out to be L1s. The next generation of "young turks" were S1s. I'm not sure why.

I'm a solid M1, clearing tenure early and continuing in an upwards trajectory thereafter but not quite an S1 superstar.

just got tenure and think i'll be an m1. it's hard to imagine flatlining or declining. it all gets so much easier after all that pre-tenure practice.

I don't know if we've discussed this previously, but contrary to Anonymous 3:57, what I've noticed is that deadwood usually tend to congregate at Associate Professor rank---there seems to be far fewer full Professors who are deadwood than Associate Professors. It is also true that some faculty contribute greatly in an admin role and do no research, but that's not what we're talking about here.

So it'd be interesting to see the full Professor line on this graph too.

I considered adding another line to the graph to show something about the assoc to professor promotion (or not), just to make the graph more awesome, but I have yet to decide where this line should go.

I know several S1's and they are all uberconfident and with excellent pedigrees; there is something about being groomed in several top-notch programs to make you feel entitled to high-profile publications and success, which is key in going after these things...

Can we talk about that? Cause I know a couple such people, too, the ones I know are all men, and I think all of them oversell their work and are overly entitled. And yet, I wish I could be more like them, since they are happier, get promoted more easily, get more high-ranking publications (because they oversell their results), and are generally perceived to be overall brilliant by lots of people who can't really judge their work properly.

I'm an M1, I made the bar but definitely feel like I have done so much more after tenure. Partly because work in my field just takes some time to really get off the ground.

"Cause I know a couple such people, too, the ones I know are all men, and I think all of them oversell their work and are overly entitled."

I have noticed that our advisers at these top schools reward such behavior in men and punish it in women. Women are expected to be humble, and, of course, have to reach a much higher bar before they're allowed to be confident.

End the line three years after tenure. I have just resigned (effective in June so still teaching). This is in part because at best I'm flatlining on your plot - at the cost of one Hell of a lot of effort. For me it never got easier, as it seems to for many people. It's better to get out than to burn the candle at both ends and still be disrespected for never publishing quite enough or having enough disciples. I mean, grad students.